The words Hinduism and Bhagavadgita always go together that is how Gita has mixed with the culture. In this celestial song of Bhagawan Sri Krishna in the battlefield of Kurukshetra, the Vedic teachings have sanctified the tormented mind of the great hero of all times, Arjuna. In a word, Bhagavadgita is the guide to the teachings of both Karma and Jnana. It has influenced the bosom of all the great people round the world. “Actually, Gita is not just a teaching, it’s a living voice which impels everyone towards Karma-Yoga Nishta and thus Advaita Jnana” says Pujya Acharya.
In 2007, Pujya Acharya conducted a 54-day Jnana Yagna wherein he expounded on all the 701 slokas in the Gita.
It is advised that you listen to Vedanta Parichayam before listening to these discourses. 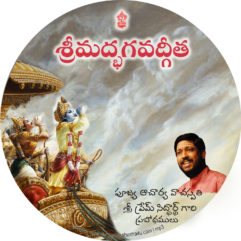