Mandukya Upanishad of the Atharvana Veda is the smallest of the 10 Upanishads and also the most difficult to study! The 12 mantras of the Upanishad briefly encapsulate the teachings of all the Upanishads. Hence this is traditionally studied along with the Karikas written by Sri Gaudapadacharya (Adi Shankaracharya’s Parama Guru) for better clarity.

This Upanishad deals with the “analysis” of Atman and the word “Om”. In the process of such analysis, the Upanishad tends to be very critical about every aspect of Jeeva and establishes the Consciousness to be Absolute and Real.

In this elaborate “introduction” spread across 22 classes, Pujya Acharya Sri Prem Siddharth ji has presented the gist of the Upanishadic mantras as well as the 4 Prakaranams of Sri Gaudapada Karikas. Some of the technical aspects dealt in these classes are:

#The Unreality of Known and the Knower! #A thorough study of the three states of Consciousness #Is Samadhi an important aspect of Atma Jnana?  #A very in-depth study of Turiya, the 4th. #How Vedanta describes the indescribable? #An Inquiry into the Word “OM” #The meaning of Silence #Knowledge and Faith  #Introduction to Ajaativada (Gaudapadacharya/Advaita), Asatkaryavada (Nyaya), Satkaryavada (Sankhya) & Atmakhyativada (Buddhists)…

These classes demand a rapt attention and a committed pursuit of Sravanam. Highly recommended for the seekers of Upanishads and Vedanta. 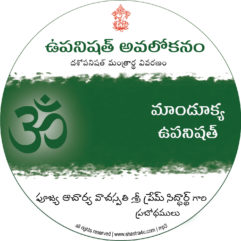